There is nothing, but darkness ahead thick, black and cold.  I can hear the growl of the demon that is tormenting me inching ever closer.  Stumbling, I fall cracking my head on a rock.  I can taste the blood as it trickles across my lips…I’m as good as dead.

The cardboard roof does little to keep the icy rain and bone-chilling cold from compounding his pain.  Looked upon as a piece of worthless trash, he is invisible to passersby..

Perhaps if they realized they were just one paycheck away from his Hell, they’d offer him a bit more sympathy.

The torturous heat and putrid stagnant air was eerie and sickening as I cut through the alley.  The smell of rotting garbage carried by steam emitted from god-knows-where had me second-guessing my choice of shortcuts.

Halfway through my journey the sound of a shrieking cat and the tipping of a trash can startled my nerves…I jumped.  Spinning around I caught a fast moving shadow streak across the alley.

I had enough I thought, turning and running for my life back to the relative safety of the crowded thoroughfare. Saving a few seconds travel certainly isn’t worth risking it all.

Quoting chapter and verse from god knows what imaginary Bible, you condemned the innocent to eternal damnation through the screeching of your megaphone. Still under the banner of the rainbow they marched defiantly with smiles on their faces and love in their hearts for you and all in attendance.

Could it be that this is more virtuous in the eyes of Christ than the hate that spews from your blasphemous mouth.  Maybe next time you should take the time to read your precious New Testament and ask yourself…

What would Jesus do?

Gives you food for thought now doesn’t it?

Thank you Carol at writersdream9.wordpress.com for choosing me to take part in this challenge, I enjoyed it very much.

The rules are as follows:

Blood flows from my mouth.  That airbag hit with such fury that it split my lip. What was that fawn doing standing in my way?  I couldn’t hit him, so my victim was a guard rail which took my car and my lip with it.  Waiting for a cop to show up was agonizing and with all of this blood on my shirt I look as if I am a shooting fatality.  All I know is that if I had to do it again I would…without vacillation.

If you do not wish to participate that is perfectly fine, I just wanted you to know that I find you all very talented and that I enjoy your writing very much.  Have fun with it if you choose…it really is quite challenging.

Prostate on the fetid jungle floor,

He lay mesmerized by the tablets shambolic scribble.

What could this possibly mean?

Hands shaking as he held the tablet, deep down he knew.

Though menacing, with his henna facial markings,

He had an uneasy feeling that he could not diffuse.

Fraught with fear, he reached for his decanter of Holy Water,

Thinking he could protect himself from this Pagan curse..

Chanting, the lowly monk prayed that the grace of his God would save him,

But alas, the synthesis of prayer and paraphernalia could not shield his mortal soul.

The lowly monk rose with tablet raised overhead and struck,

Shattering the curse over a rock that lay before him,

Praying that the tablets curse with him would die 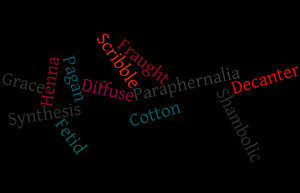 O calloused heart, how for art thou still beating,

Taking flight at thy masters pleading,

Thou art more beautiful than the rose,

Tho thy thorns art no less deadly.

No more couldst I offer to thee my betrothed,

Than to be forthright of mind and steady.

Coarse is thine heart when passions in the rough,

Dante’s tragedy to my core hath been painted.

Were thou only more gentle of spirit, more tender and kind,

In my true love thou wouldst bath and no truer love wouldst thou find.

I grow weary of this eternal fight,

Shackled to the rack of banker and coin.

Neither watch out for societies rights,

Instead every turn–a kick to the groin.

Warned of their evil for centuries past,

We heeded their warning ’til memories fade.

Enslave us they must, right on down to the last,

By our sweat and blood until death we have paid.

It stops not here for the cycle goes on,

Our children continue to pay on our debts.

We and our progeny are nothing but pawns,

On whose lives without conscience they’ve all placed their bets.

The greed of our system we claim best in the world,

Quite possibly it would be if the bankers we had hurled.

Caligula though tyrant he be, is not so unlike my chaotic mind,

Burned to the ground like Nero’s Rome, a cure oh so difficult to find.

Eating at my senses and sanity like a cancer.

When focus eludes me no matter how I try.

Is this a curse–a symptom of a troubled body and soul,

I know not, still it leaves me feeling less than whole.

Most fortunate to me is that it never long lasts,

A matter of hours or days is all it takes to pass.

Yet this is of no less a concern and satisfies me little,

Alone I am not of this I am certain,

As this diatribe ends and I bring down the curtain.

Praying that soon this too will vanish,

Returning to me clarity from whence it was banished.